Keep your distance! How crowd safety management can help us control the Corona crisis 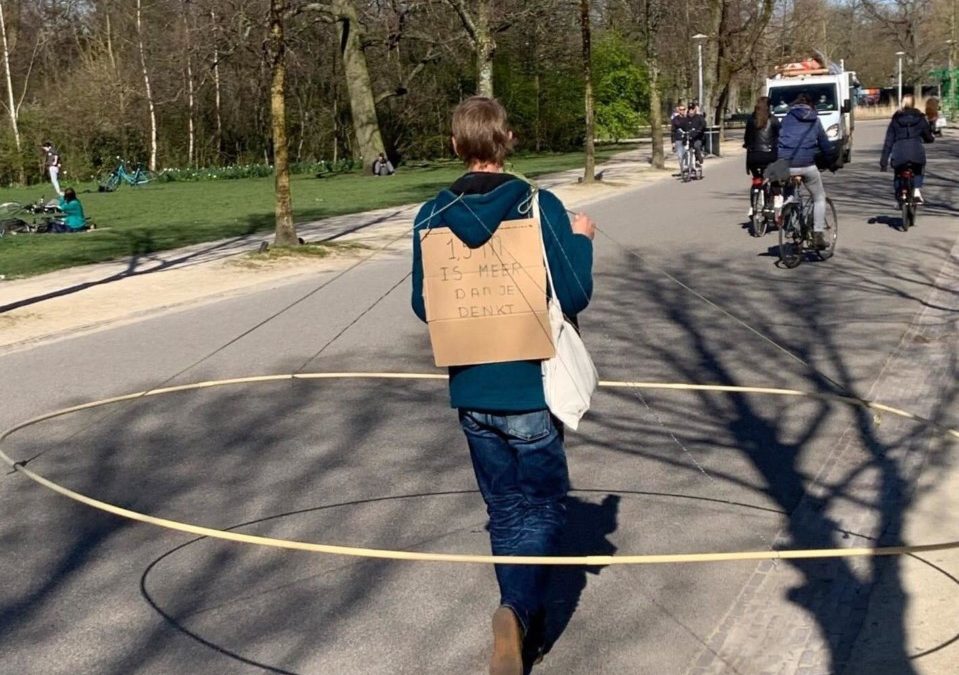 Within our companies ESI and CrowdProfessionals, we are occupied with crowd safety. During the current Corona pandemic, this safety of the crowd is more important than ever. As citizens of a country we now essentially form one big crowd of which the members are interdependent towards their safety and wellbeing. In which manner can crowd safety management contribute to our safety during this Corona crisis?

The Corona crisis results in a pressing need to prevent people from gathering and forming crowds throughout our whole country. Thus, the Dutch government has proclaimed that it is of the upmost importance to keep a distance of at least 1.5 meters to other persons. Mayors have been given the authority to designate areas in which the gathering of more than 3 persons is prohibited. This situation therefore seems to ask for an increasing demand in enforcement of these new rules.

At this moment this social distancing rule has been in effect for a week. From the medical experts we have learnt that the hazard of being infected is greatly diminished when the correct distance is maintained. However during this week it has also been found that a large number of people do not comply to the rules. It has been clearly visible these last few days throughout our country, that people – old and young – have not kept the safe distance especially when queueing in front of cash desks, during walks outside, and while relaxing in parks and similar places. Some of these people showed a rather lax attitude towards the new rule of social distancing even when interviewed on camera: “I will decide for it (whether or not to adhere to the new rules) myself.’ Despite the clear feeling of disapproval such behaviour provokes, from our viewpoint such an attitude is understandable. As long as people are not sufficiently aware of the danger this Corona virus induces to them, this risk will always lose to the instant reward of still being in front, getting that train to the beach or being a part of that popular youth-group. We still are humans making bad choices as also can be seen from the many people still using Whatsapp while driving a car or bicycle. 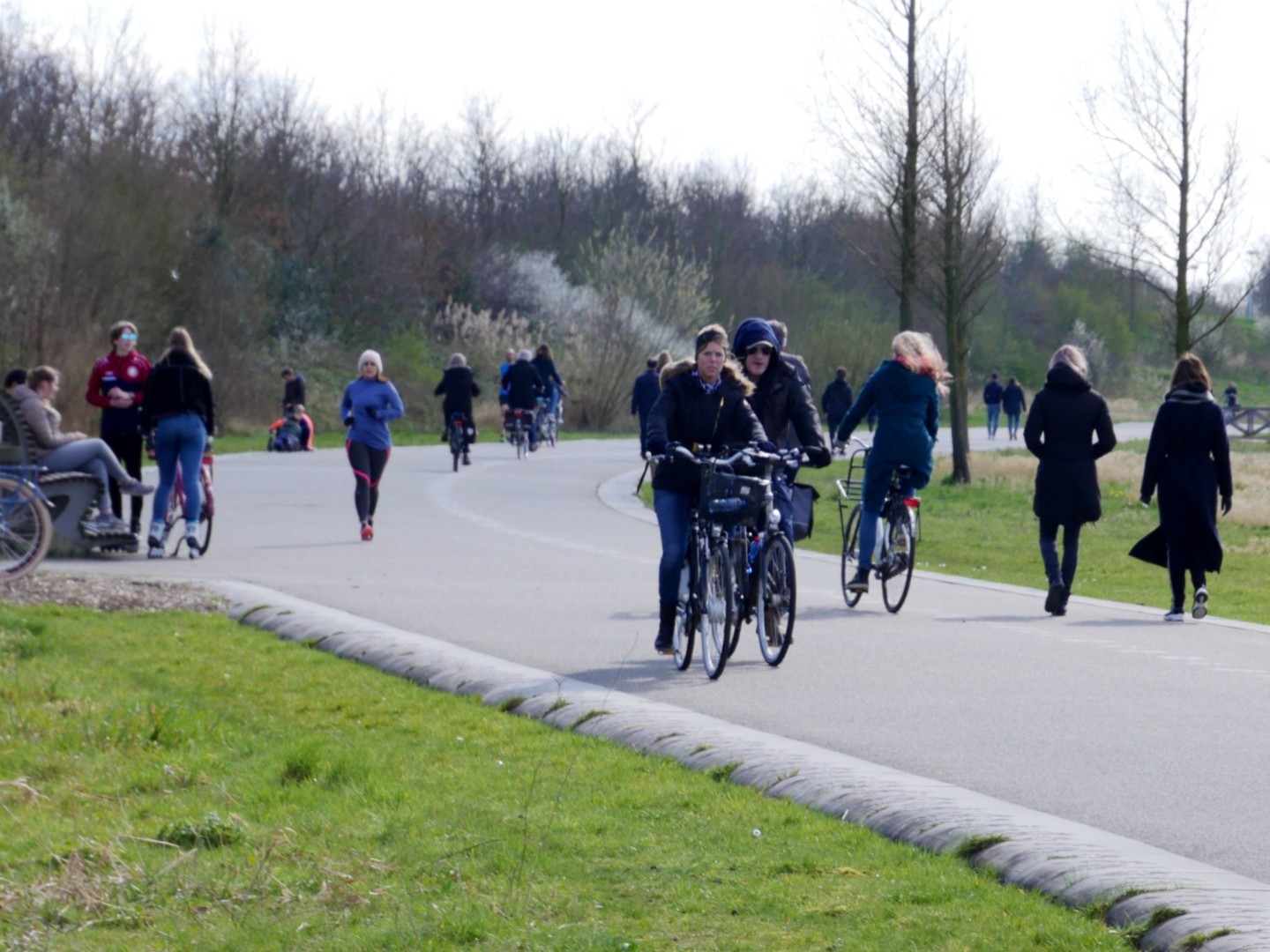 In general, crowds behave following distinct and predictable behavioural patterns. The science that analyses and explains this behaviour is called crowd science. One of the leading experts within this research field is Prof. Dr. G.K. Still (UK), who describes crowd science as interdisciplinary, a combination of psychology and mathematics. Insights that originate from crowd science and the techniques from crowd management, are also useful during this Corona crisis. They can be used to explain individual choices or group behaviour, but also to determine whether the proposed measures – regulating, seducing, enforcing – will be effective. These efforts are directed at ensuring safety and reducing the risk of infection. It can also be used to prevent disturbance within neighbourhoods, venues or parks that arise from the unwanted gathering of crowds.

During normal conditions we find crowd risks such as tripping, falling and crushing to become a significant risk factor at a density of 2 people per square meter and above. When crowd densities are expected to rise above this level, for instance within a festival tent, it is very important to put sufficient effort into proper risk management. From the Corona virus a new norm of crowd density arises: 1.5 meter distance between all people. What is the effect of this norm towards the number of people per square meter? If we imagine one standing person to occupy an area of about 30 by 50 centimetre (also see figure), with a density of one person per square meter all people have a distance to each other of 50 to 70 centimetres assuming an even distribution of these people within that space. Due to the current norm of 1.5 meter between persons this density becomes much lower, this is caused due to the need to have 75 centimetres of space to the left and right side of every person (50 centimetre extra) and also 75 centimetres to the front and back (35 centimetres extra). As such, every person now occupies a total area of 3.6 square meter ((50+75+75) x (30+75+75)). The safe density of the crowd then becomes as low as 0.3 persons per square meter when the social distance norm is followed. This maximum density can be applied to static areas such as waiting areas, viewing zones and smoking areas. 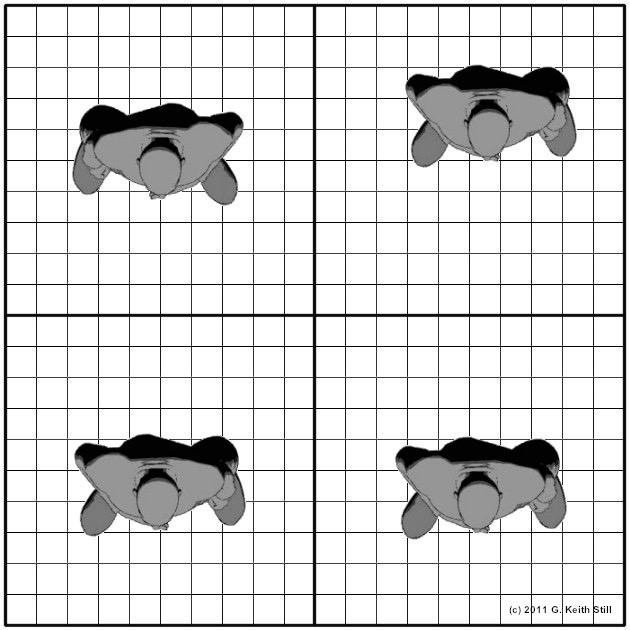 When dynamic crowds are considered, such as walking on a path, within a store or station hall, the calculations change due to moving persons taking up more space and therefore shortening the distance between them. The width of the person within the image below this text, during movement rises from 50 to about 55 centimetres, from the front towards the back it rises from 30 to about 80 centimetres. When we apply this to the social distance norm of 1.5 meter this leads to an occupation area of 4.7 square meter per person ((55+75+75) x (80+75+75) resulting in a density of 0.2 persons per square meter. 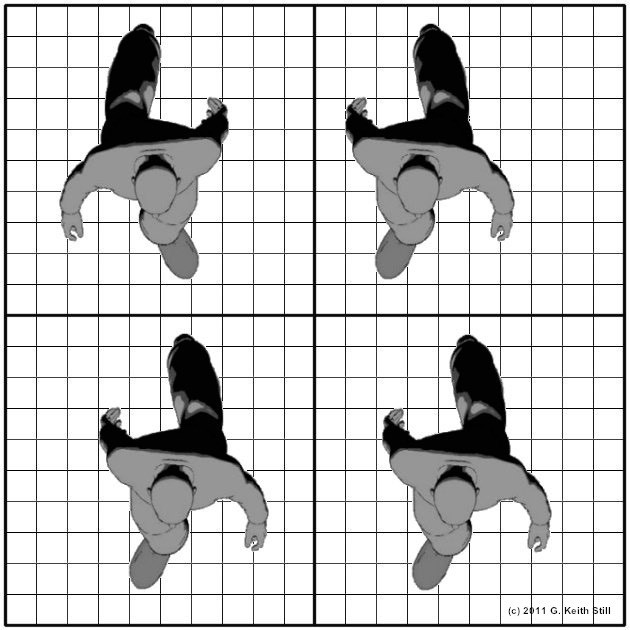 These insights sharpen our view towards the amount of people that can be hosted in areas such as parks, shops and playgrounds. However, such calculated densities are averages, thus can differ from place to place within such locations and thus potentially breaching the social distance norm on a group level. Nonetheless they enable the calculation of the maximum amount of people a specific location can hold. As an example, we consider a park with an area of 10.000 square meter of usable space with 30% paths (dynamic use) and 70% leisure areas (static use.) Using the standard norm of 2 persons per square meter the safe capacity of this park would be 20.000 people. With the new social distance norm however the safe capacity of the park is now limited to only 2.700 people!

With the current set and duration of the anti-Corona measures, it is foreseeable that maintaining or preventing crowds to gather will become increasingly difficult. Does this difficulty warrant the need to have security guards in our parks and shops to ensure this social distance norm? Do we have to commit extensive resources from local government and police to enforce the rules by writing out tickets to offenders? Crowd science can contribute towards answering these fundamental questions, through presenting insights into the correct approach of this corona crisis. Based upon our expertise we present a number of tips:

The requirements our society faces, which arise from the current approach to the Corona crisis, does not result in high-risk situations in all of our public space. Most often a higher risk of infection occurs within the well-known public places and venues in which large crowds of people gather, often as a result from incentives or certain ‘rewards’. Within the next few days the Local Government will be able to map such locations, determine the risks that arise from these locations and at what times such a risk could occur. Such a mapping of risk locations will be most effective when the advice of the police, local entrepreneurs and social partners is included. Thereafter it is essential to examine in which manner interventions regarding Design, Information and Management can be applied to these locations. Possible interventions include placing barriers, presenting information regarding the density of crowds / safe capacity or the deployment of a safety guard or local supervisor to enforce adherence to the safe crowd density.

This principle can also easily be applied to local places such as a bakery: by closing the door (design), placing a note with the amount of customers that are allowed inside (information) and by deploying an employee to present a friendly welcome to the customers while at the same time ensuring that the maximum number of people in the shop is not exceeded (management). Such an active and thought out approach will most likely yield better results than passively waiting for every civilian to become sufficiently aware of the risks of infection by the Corona virus.